David A. DiLoreto, Jr., M.D., Ph.D., was named chair of the University of Rochester Medical Center's Department of Ophthalmology and director of the Flaum Eye Institute, pending approval by the Office of the Provost. He succeeds Chair Steven Feldon, M.D., M.B.A., who will transition to associate vice president and director of the Office of Biomedical Research Development.

"Under Steve Feldon's leadership, the Flaum Eye Institute experienced remarkable growth in size, volume and reputation over the past decade. We are confident David DiLoreto is the right person to build upon this strong foundation to move us forward in the spirit of Meliora," said Mark Taubman, M.D., Medical Center CEO. "He has the interpersonal and communication skills to work well with colleagues across the department, Medical Center, and University to advance the institutional missions. We are delighted he has accepted the position."

DiLoreto will take on the new role Dec. 16.

Science tells us that a lot of good things happen in our brains while we sleep – learning and memories are consolidated and waste is removed, among other things. New research shows for the first time that important immune cells called microglia – which play an important role in reorganizing the connections between nerve cells, fighting infections, and repairing damage – are also primarily active while we sleep.

The findings, which were conducted in mice and appear in the journal Nature Neuroscience, have implications for brain plasticity, diseases like autism spectrum disorders, schizophrenia, and dementia, which arise when the brain's networks are not maintained properly, and the ability of the brain to fight off infection and repair the damage following a stroke or other traumatic injury.

"It has largely been assumed that the dynamic movement of microglial processes is not sensitive to the behavioral state of the animal," said Ania Majewska, Ph.D., a professor in the University of Rochester Medical Center's (URMC) Del Monte Institute for Neuroscience and lead author of the study. "This research shows that the signals in our brain that modulate the sleep and awake state also act as a switch that turns the immune system off and on." 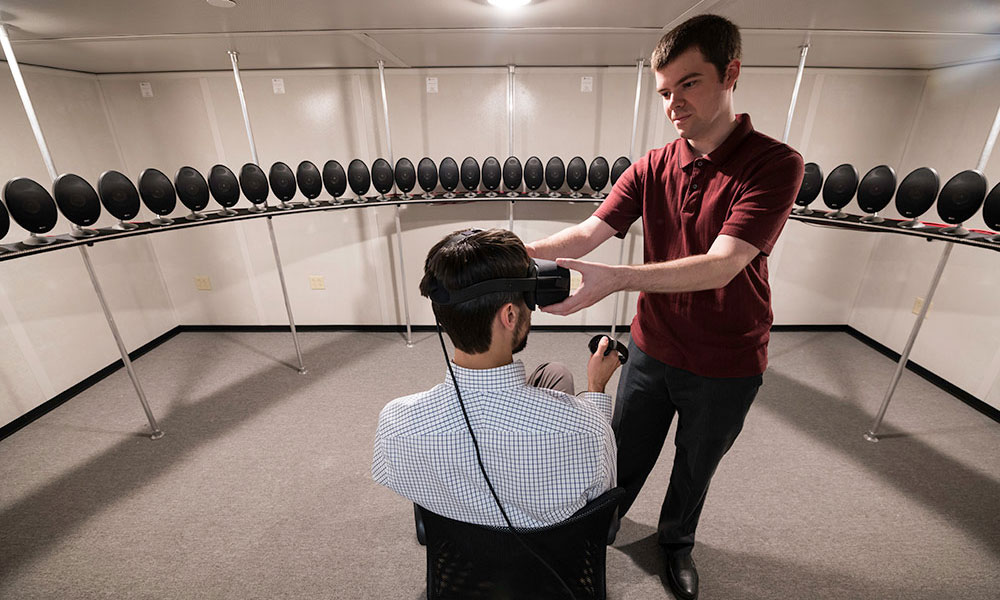 A $1.5 million grant from the National Science Foundation will provide additional impetus to a University of Rochester initiative applying augmented and virtual reality in health, education, product design, remote communication, entertainment, and other fields.

The grant will enable 62 doctoral students to be trained in the skills needed to advance AR/VR technologies and will also help them gain an appreciation for the broader cultural and societal implications of the technologies, says Mujdat Cetin, the principal investigator behind the grant. Other Rochester faculty supporting this initiative are Jannick Rolland, the Brian J. Thompson Professor of Optical Engineering; Michele Rucci, professor of brain and cognitive sciences; and Zhen Bai, assistant professor of computer science.

These mentors make a difference for first-generation, minority students

Five University of Rochester faculty mentors are the inaugural recipients of a new mentorship award from the University's David T. Kearns Center for Leadership and Diversity.

The David T. Kearns Faculty Mentoring and Teaching awards "recognize outstanding faculty members who excel at mentoring and teaching low-income, first-generation, and/or underrepresented minority students who participate in Kearns programs," says Anthony Plonczynski-Figueroa, director of operations for the Kearns Center. "All of these faculty members have shown an especially strong commitment to these students."

Two of the faculty members – Laurel Carney, the Marylou Ingram Professor in Biomedical Engineering, and Roman Sobolewski, professor of electrical and computer engineering – are being recognized for their mentorship of University undergraduates who do research each summer through the center's Xerox Engineering Research Fellows and the Ronald E. McNair program. The center also sponsors or helps administer three National Science Foundation-funded REU (research experience for undergraduates) programs that bring students to Rochester from other universities for summer research.

Why can we see moving objects against their backgrounds? 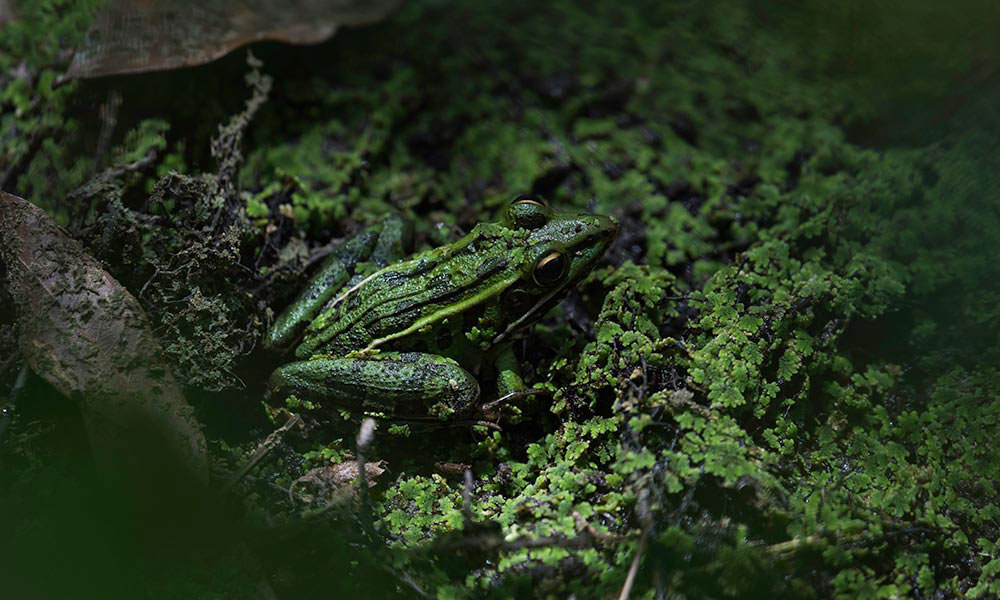 Animals camouflaged against their background, like this Florida leopard frog, become easier to detect once they start moving. New research from Rochester scientists explores why human beings are good at discerning moving objects and how we can train our brains to be better at this as we age. (University of Rochester photo / J. Adam Fenster)

According to new research from scientists at the University of Rochester, one reason human beings are good at discerning smaller moving objects in the foreground is that the brain becomes desensitized to the motion in the larger background. Conversely, when a person's brain is more sensitive to background motion, the negative trade-off is that she will be less sensitive to smaller foreground objects. The research, published in the journal Nature Communications, could lead to new training programs for elderly adults and patients with conditions such as schizophrenia, which has been linked to weaker motion segregation. 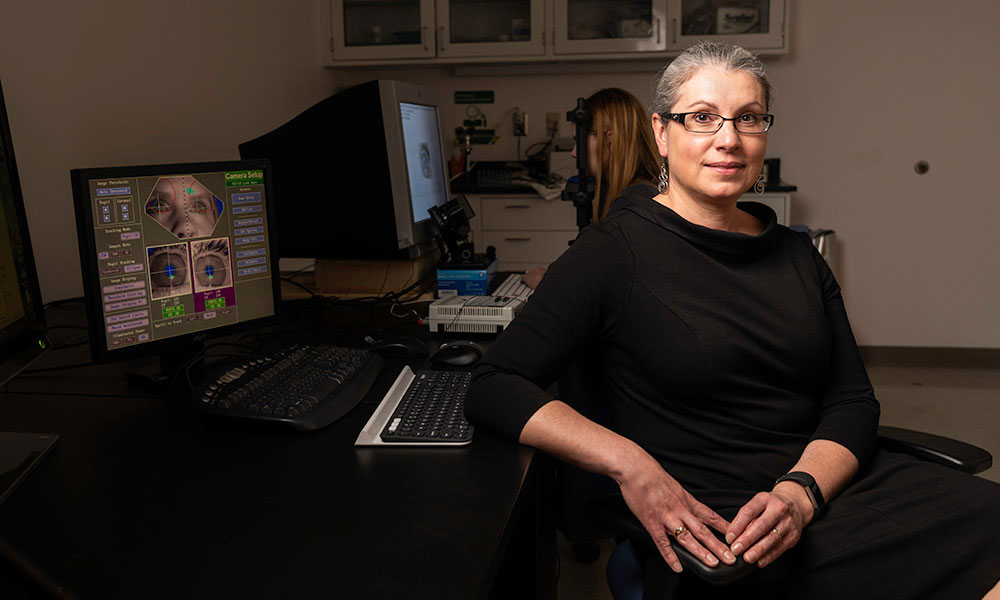 Krystel Huxlin, the James V. Aquavella, M.D. Professor in Ophthalmology at the University's Flaum Eye Institute, is among the lead authors in a new study that shows how brain stimulation can enhance a patient's ability to re-train their brains to process visual information after a stroke or an injury. (University of Rochester photo / J. Adam Fenster)

Practice results in better learning. Consider learning a musical instrument, for example: the more one practices, the better one will be able to learn to play. The same holds true for cognition and visual perception: with practice, a person can learn to see better—and this is the case for both healthy adults and patients who experience vision loss because of a traumatic brain injury or stroke.

Imaging That Twinkle in Your Eye: Assessing Vascular Health by Imaging Blood Cells in the Retina

Women of invention: How Rochester faculty find success as patent-holders

They develop new technologies to target the delivery of drug therapies with unprecedented accuracy, to help stroke victims regain their sight, and to vaccinate people with a simple, wearable skin patch that could have global impact.

Lisa Beck, Danielle Benoit, Paula Doyle, Hykekyun Rhee, Krystel Huxlin, and Jannick Rolland are among the women inventors who have placed the University of Rochester in an enviable position.

From a dancer's form to freeform optics 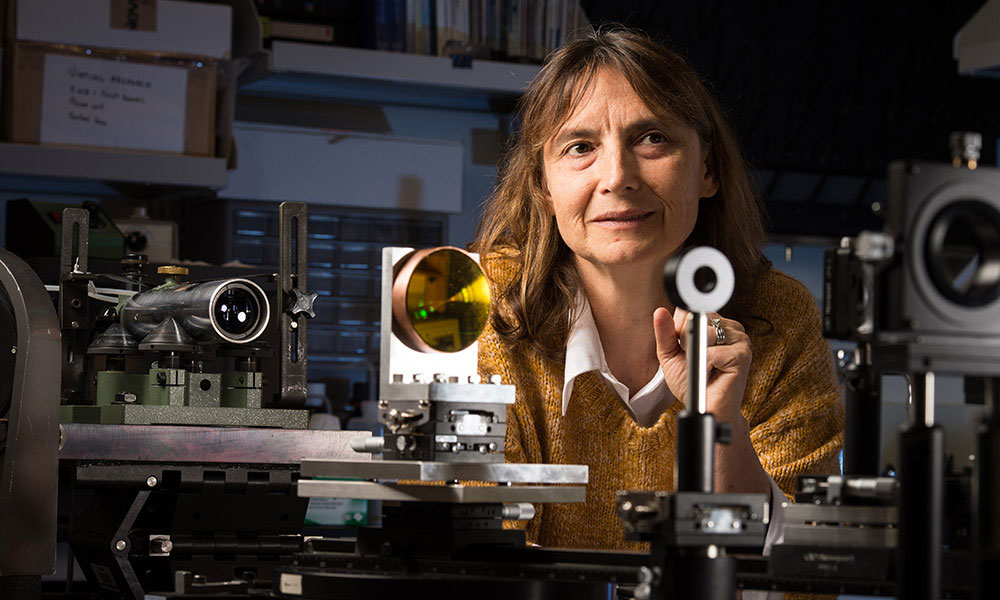 Jannick Rolland, director of the Center of Freeform Optics, has 35 patents to her name and is listed among the top women pioneers in augmented and virtual reality. (University of Rochester photo / J. Adam Fenster)

She had just received her diploma—the equivalent of a master's degree—from the Institut D'Optique in Orsay, France. But she wasn't sure whether she should pursue her aptitude for optics—or her talent for dance.

She wanted to come to the United States to become more fluent in English. But she was three points shy of passing an oral language exam to enter the University of Arizona.

An eye for seeing big problems, and solving them 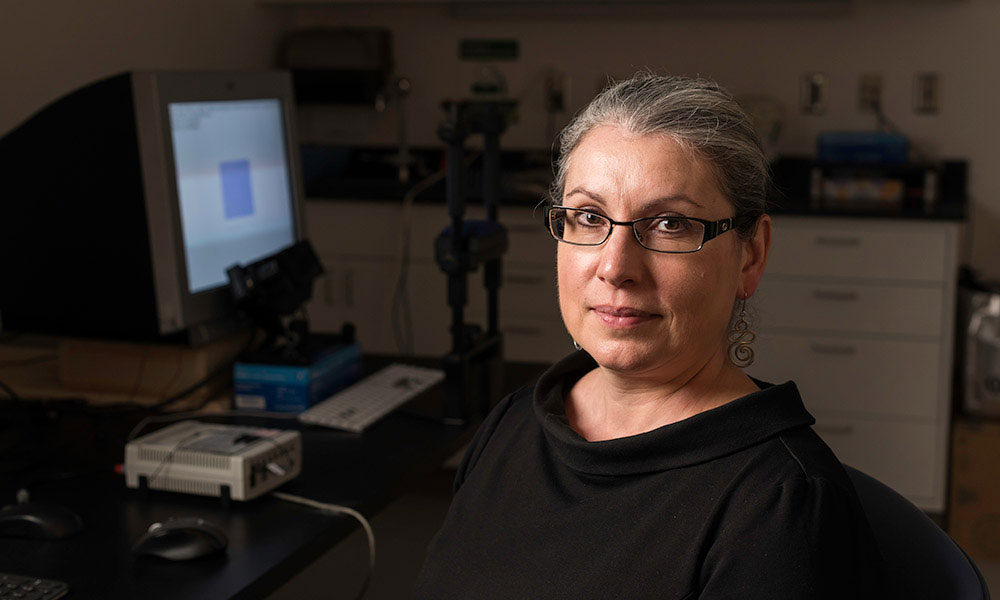 For patients with vision loss after a stroke or brain injury, a simple therapy device developed by professor of ophthalmology Krystel Huxlin could help train the eye to see again. (University of Rochester photo / J. Adam Fenster)

From the very beginning of her career, Krystel Huxlin has looked for big problems to solve. Now she's doing something about a very big problem indeed: Loss of vision after a stroke or brain injury.

"When people have a stroke that affects the motor system, they are sent to rehab as soon as possible," says Huxlin, the James V. Aquavella, M.D. Professor in Ophthalmology at the University of Rochester's Flaum Eye Institute. "They get retrained to use a weak arm or leg, and to regain speech."

"But if they have a stroke that affects vision, which involves more than 30 percent of our brain matter and is our dominant sense, they are told there's essentially nothing that can be done," They're told "they should go home and get used to being blind."

New Study Reshapes Understanding of How the Brain Recovers from Injury

Each year, approximately 265,000 Americans have a stroke that causes visual impairment. New research from Colleen Schneider, which appears in the journal Proceedings of the Royal Society B, sheds light on how the damage in the brain caused by a stroke can lead to permanent vision impairment. The findings could provide researchers with a blueprint to better identify which areas of vision are recoverable, facilitating the development of more effective interventions to encourage vision recovery.

"We were the final site to join the study and compressed for time to get local children on board, so we are very grateful for our community panel that supported our efforts from the beginning," said John Foxe, Ph.D., co-principal investigator for the ABCD Study site at URMC and director of the Del Monte Institute for Neuroscience. "We're pleased to say that we now have a group that represents a broad variety of backgrounds."

Michele Rucci, professor of brain and cognitive sciences, with equipment he uses to study small movements that a person is not even aware of making. These small eye movements, once thought to be inconsequential, are critical to the visual system in helping us reconstruct a scene. (University of Rochester photo / J. Adam Fenster)

It is often difficult for a driver to see a person walking on the side of the road at night—especially if the person is wearing dark colors. One of the factors causing this difficulty is a decrease in contrast, making it hard to segment an object, such as a person, from its background.

Researchers previously believed contrast sensitivity function—the minimum level of black and white that a person needs to detect a pattern—was mainly dictated by the optics of the eye and processing in the brain. Now, in a study published in the journal eLife, researchers, including Michele Rucci at the University of Rochester, explain that there is another factor at play: contrast sensitivity also depends on small eye movements that a person is not even aware of making.